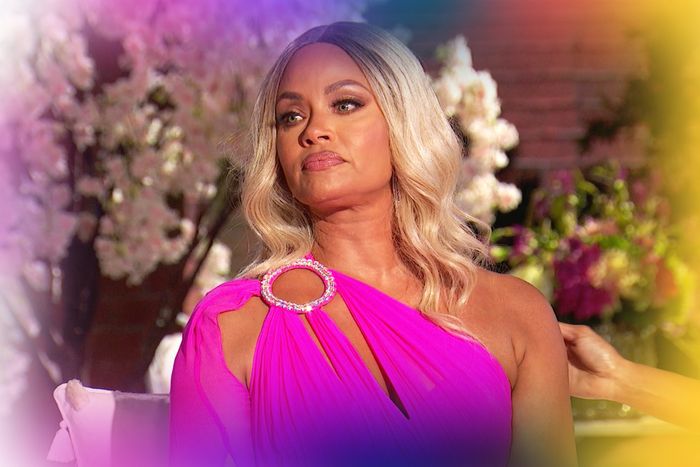 PETER PETER HOUSEWIVES EATER: You know those rumors that are doubtfully sourced and you know might not be true but you really want them to be true for the good of the shows but you also want them not to be true for the good of the Housewife involved? Well, we have quite the doozy. Media Take Out reports that Gizelle Bryant is dating Peter Thomas, the ex-husband of Cynthia Bailey. Peter recently opened a Bar One in Baltimore, and apparently RHOP has filmed five (five!) scenes there of him and Gizelle hanging out. This naturally invites speculation that their relationship will be the centerpiece of her story line this season since her disastrous renovation of Chateau Gizelle has come to a hodgepodge end.

The reason not to believe this rumor is the detail about filming five times at one restaurant — not even Ashley Darby’s ill-fated Oz got that much attention. Then again, the women were spotted filming at Bar One’s Miami location this week, so maybe he is getting that much attention. But the reason to believe it is of course Gizelle would date Peter Thomas. A no-good, emotionally unavailable man from Atlanta who’s going to treat her poorly is exactly her type. However, I could also see Peter leaking this fake rumor just to get some attention for all of his (often failing) businesses.

Both Gizelle and her bestie, Robyn Dixon, have independently said it is absolutely not true, but, you know, can it be? For a season, a reason, or a lifetime, as word art you buy at Home Goods would say.

CAST OF CHARACTERS: The RHONJ reunion (see below!) still hasn’t finished airing, and we’re already getting rumors about the cast for next season. The biggest of which is Jackie Goldschneider has been demoted to “friend of.” That would be a shame because her very public struggle with disordered eating was my favorite part of this past season. Shockingly, it looks like no one has been fired, though it’s no surprise that Traci Johnson will not be back. But can we keep her husband, Tiki Barber, as a friend of the boys?

There are also reports that three new women are auditioning to be holding a gabagool in the opening credits. (That’s what they hold, right?) AllAboutTRH identifies the new candidates as bougie kids’-store owner Danielle Cabral (who sports a double-date picture with Teresa Giudice and Luis Relais on her Insta grid), Rachel Fuda (who has only 800 or so followers, but among them are Margaret Josephs and Melissa Gorga), and shoe company CEO Jenn Fessler (who has even fewer Insta followers than Rachel). We’ll have to wait and see who, if any, of them makes the final cut, but it seems like Teresa is gonna need a few more friends.

VALLEY OF THE D’OHS: Disgraced Vanderpump Rules star Stassi Schroeder is on a media blitz for her new book, Off With Her Head, and is seemingly doing any podcast that will have her. (Same, sis — I get it.) On The Morning Toast, she said what we all knew for quite some time: Bravo had a spinoff planned for her and the old-school cast before she and Kristen Doute got fired in the wake of the BLM protests. The show was meant to be called Valley Rules and feature all of the old cast in their new neighborhood of Valley Village, and Pump Rules would be rebooted with a whole new class of SURvers. Instead, we got the original Pump Drools limping along like a wounded dog.

Fans have been wagging that another spinoff was in the offing when Andy Cohen recently referred to Lala Kent as being from Vanderpump Valley on a recent episode of WWHL. Lisa Vanderpump herself told E! news she can’t validate those rumors or speak to the renewal of the original show. In classic LVP fashion, she said, “I’m not allowed to say, but I always know more than you.”

LEAKES LEAKS: In a new airport TMZ interview, NeNe Leakes answers questions many fans (including those who run the Institute) had about the motives and timing behind her lawsuit against Bravo for racial discrimination. NeNe says her motivation was to stop racial prejudice, and she filed it now because she had been trying to file it for years but kept getting roadblocked. Okay, asked and answered. While promoting the new season of RHOA, both Kandi Burruss and Marlo Hampton were asked about the suit, and both declined to comment. NeNe was asked if she was seeking compensatory damages, which she didn’t answer, but she must be sitting pretty, considering she just moved into a fab $1.8 million Atlanta condo.

SUMMER SHOULD BE FUN: We started with a rumor that might be true, so let’s end with one that certainly isn’t. Someone posted to Instagram bathroom-stall wall DeuxMoi that Ramona Singer knows she’s not going to return to either RHONY or RHONY: Glue Factory, so instead she wants Bravo to use her house for the next season of Summer House with her acting as the Mrs. Roper to a house full of sexy singles. (If you are too young to get this reference, I envy you and would like to drink your blood.) She’s also advocating for her daughter, Avery Singer, to have a full-time role on the show. Okay. I can believe that Ramona “Floor Pooper” Singer has asked Bravo for this to happen. Of course she did. But I can’t believe for a second they would do it.

• The Institute would like to announce the creation of the Noella Bergener Legal Defense Fund to pay for her lawyers to cover the lawsuit she just lost. She now has to pay $450,000 for [checks notes] unpaid legal bills.

• Ex–Kardashian bestie Larsa Pippen was hanging out in Miami with ex–Kardashian lover Scott Disick. If this is not on the next season of RHOM, we’re gonna be pissed!

• Our sincerest condolences to our spiritual mother Jill Zarin who has yet to hear from RHONY: Old Folks Home about returning to the show. It’s coming, Jill! We promise.

• Speaking of Jill, The Real Housewives Ultimate Girls Trip: The Hunger Games: Mockingbird: Part 2 trailer dropped this week, and it is just the kind of horror film we can’t wait to watch.

• Heather Dubrow walked on the High Line and no one recognized her.

• BravoCon is back in New York City, October 14 to 16. Details about lineup and tickets are so far sparse, but it doesn’t matter because the Institute is probably banned anyway.

• Peacock just made cutting the cord a little bit easier. It will now house all Housewives shows, Below Deck, Top Chef, and others the morning after they air on Bravo.

• Here is the LOL IRL Tweet of the Week.